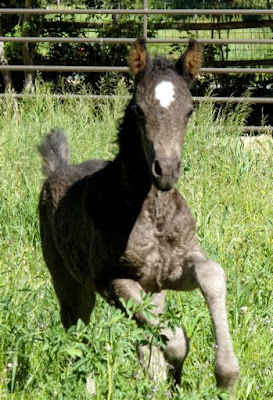 Just like her mom, Stardust, this little girl has energy! I had turned her and her mom out in the pasture for an hour, then would put them up. The second day, I led Stardust into her pen, hoping the little filly would follow like she had done the first day. She stopped outside the gate and would not come in! When I came out to shoo her into the pen with her mom, she used that as an excuse to take off! After a fling around the pasture, she came back outside the gate, and stood there. I picked up a rubber feed bucket and threw it behind her! Startled , she jumped forward through the gate! Captured!
The next day-- same thing. When her grazing time was up, she refused to come through the gate-- rubber bucket-- pop into the pen!
Day three-- she had it figured out! Instead of jumping forward when the rubber feed bucket plopped behind her, she darted to the side and ran a victory lap around the pasture, tail flying high! She won! I have left the two in the pasture permanently!
Posted by MOfoxtrotters at 9:18 PM