The GRAND Finale! "Faux Gold" aka "Roxy" has a gorgeous CURLY bay FILLY! 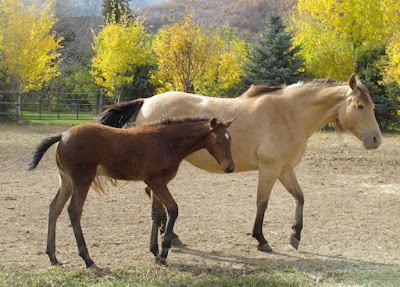 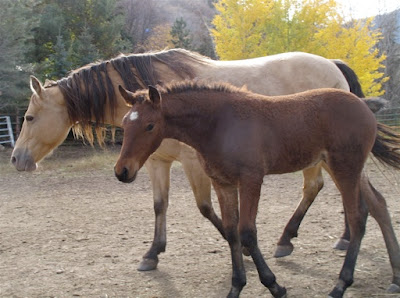 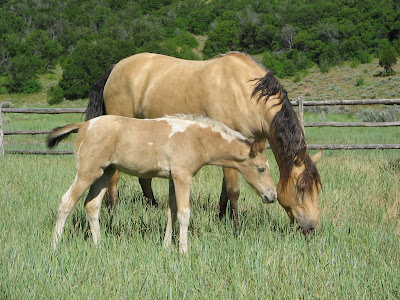 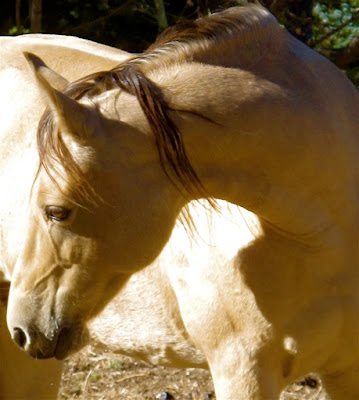 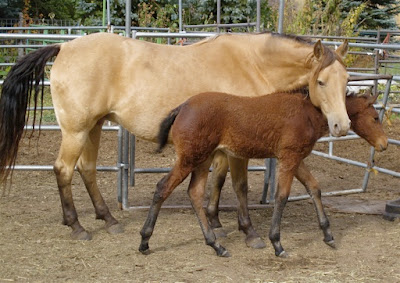 Are we blessed or what? "Roxy," our gorgeous amber champagne mare, delivered a long legged filly on 8/ 20/ 2011! I love that she is a solid bay with a white star! I think that bays are so stunning! "MO Star Bay B " has legs as long as her mom! She will be a tall elegant filly!
Posted by MOfoxtrotters at 2:11 PM No comments: 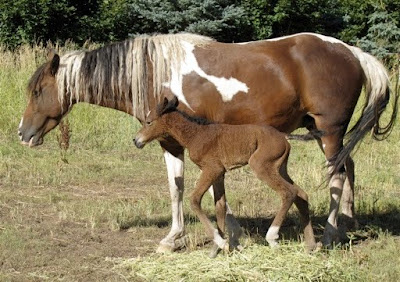 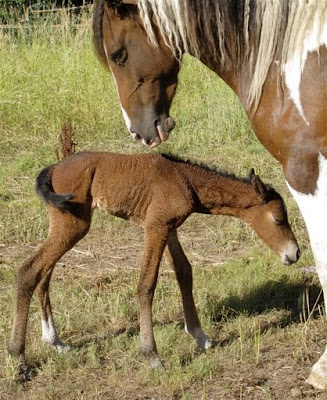 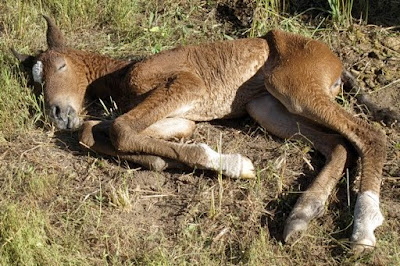 August 17, 2011 is a great day! "Liberty" delivered a cute bay curly filly! She has tons of gait, is super sweet and has tons of thick curls-- just like her sire, "Dallas"!
Posted by MOfoxtrotters at 2:06 PM No comments: 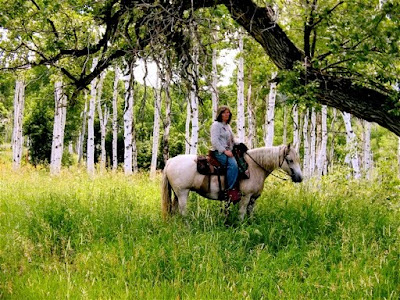 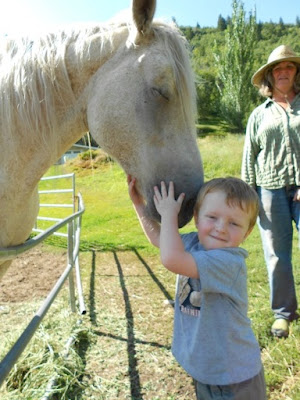 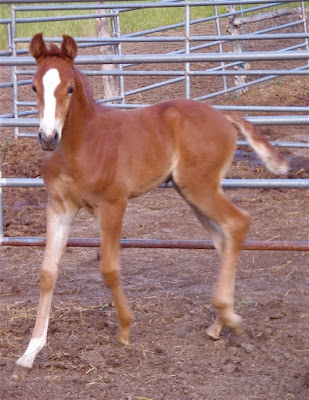 As you can see-- Mansey is our family favorite!
Mansey's color is a classic champagne masked by grey-- so I was hoping for a curly classic champagne filly....:< instead we have a sorrel straight haired horse colt! But as you can see, he is gorgeous-- like his mom--- and confident and he thinks he is pretty cool! 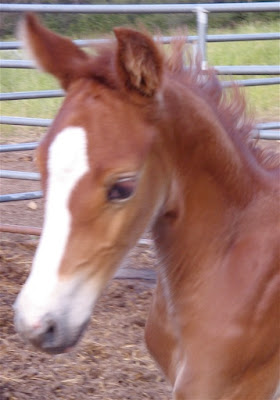 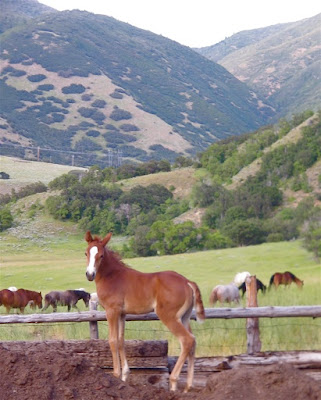 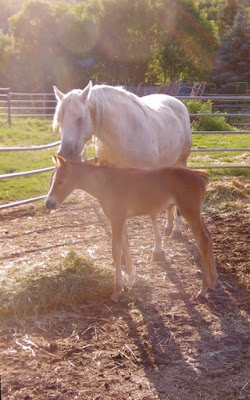 Posted by MOfoxtrotters at 1:39 PM No comments: 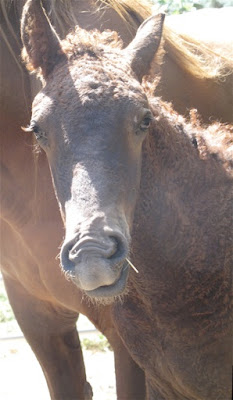 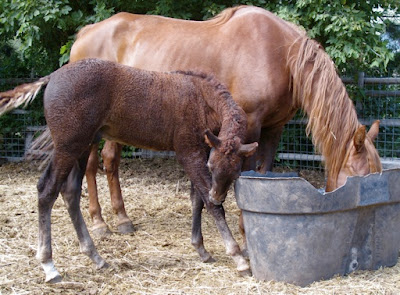 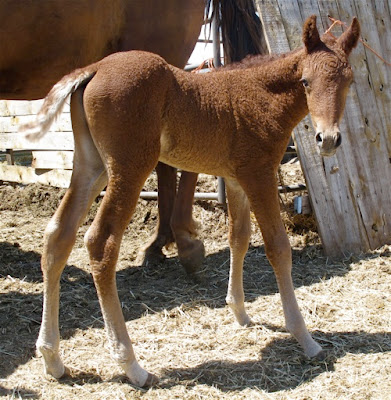 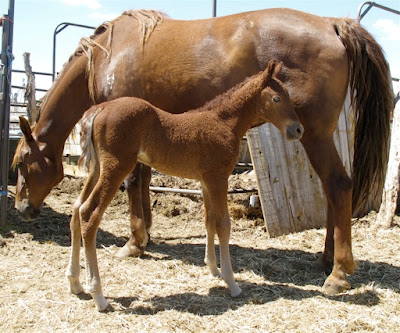 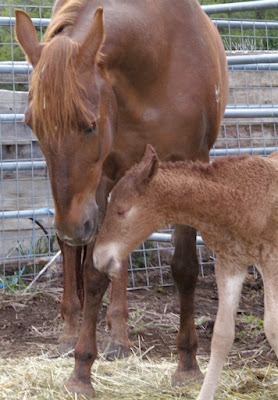 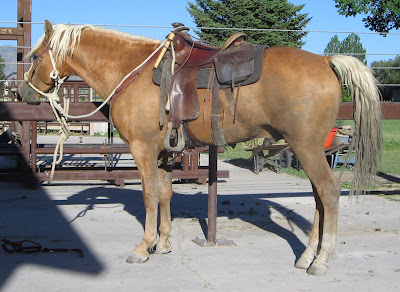 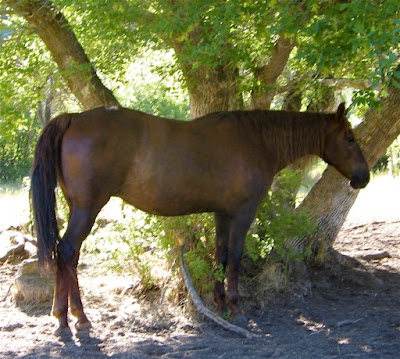 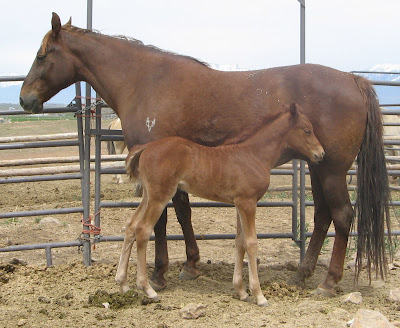 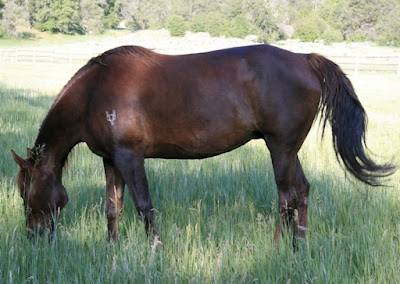 Nostalgic horse day! Gypsy gave us another gorgeous horse colt! At 19 years old, this is her last one :< She has had 3 fillies and 8 horse colts, three were kept as studs. What a wonderful mare she has been. "Gypsy " was my first fox trotter. I bought her as a long yearling in 1992 for around 1,000-- alot for a horse back then! When I saw her , at first thought she was a mule-- her ears were long, she was hump backed, ewe necked, and pretty skinny. She just had a sweet look about her that I couldn't forget. She also had great round bone in her legs.
The deal was clinched when the seller said another party was interested in her for breeding mules! NOT this sweet filly! SOOO --The seller was kind enough to take half payment in a watercolor painting. My awesome sister lent me the other half and I made payments back to her. Thus began my love of fox trotter horses. I have owned fox trotters ever since then!
When Gypsy was two years old, one of my wishes came true when I trained her myself. I used John Lyons method on ground work, but was a little nervous about how fast he got on his colts.
By now that scrawny yearling was a big gorgeous 16 hand 2 year old mare. So I asked my neighbor Jerran Flinders to help me through the riding part. Jerran was so kind and helpful and even let me use his round corral. Gypsy trained out easy and so nice, we rode many miles together. By the time she was 3 years old, she was over 16 hands, so I decided to breed her-- I had heard that that slows/ stops upward growth-- Anyways, she fully matured and filled out by the time she was six years old, and she was 16.3 hands! Her first foal was given to my husband. He named the big sorrel colt Business-- so when people asked where he was he could say he was out on business!
I was approached several times by a gentleman interested in buying "Gypsy". I finally told him huge sum that I did not think he would pay-- and he wrote me out a check. (Morlin had told me that my horses should be a business and that I could not be emotionally attached) So my "Gypsy" was sold when she was about 8 years old. I tried to buy another mare like her -- but that was not to be.
SOOO five years later when I was offered to buy "Gypsy" back, I jumped at the chance! She had been foundered and was lame on her front feet. So we have tried to keep her sound and healthy as long as possible-- yes, I soaked her grass hay for years and fed her "Safe and Sound" or beet pulp. So this is her last foal. Sadly, we had her put down this last October.
The palomino ("Gypsy's Yellow Major L.) is a 16.1 hand stallion out of "Gypsy". He is owned by Chris Guyman of Huntington, UT
Posted by MOfoxtrotters at 9:42 PM 1 comment: 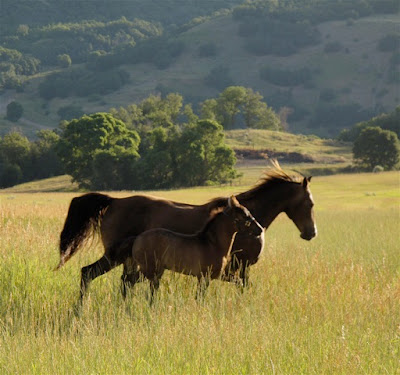 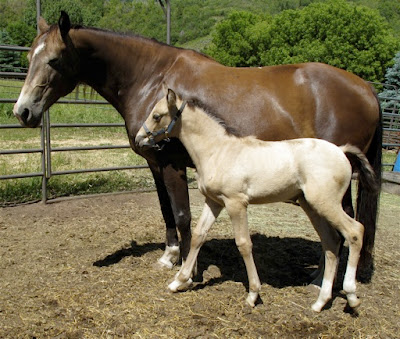 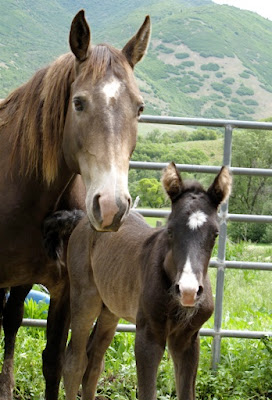 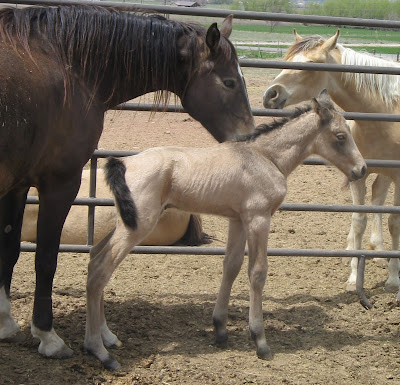 BUT.....It is another straight haired foal! :C "Princess" has given us buckskins every time! One Grand Mare! When I purchased this mare, unknown to me, she had foundered. At the time I had no idea what that was. Since purchasing her, I have had her on grass hay, which I soak in the summer, and have fed her "Safe 'N Sound" a no sugar- starch supplement when she is in foal. She is better when she is in foal, so I have used her as a broodmare since I purchased her. So a month after she foals, "Princess" has another episode-- I think it had something to do with hormones, as I did not change her feed? She became very lame ;C So sadly we put her down when the foal was weaned at 6 months. Photos are of Princess and her last three foals! MO Rowdy is a sooty buckskin just like his mom. I am so grateful that I could own this gorgeous mare for a short time, and hopefully make her comfortable in her last years.
Posted by MOfoxtrotters at 3:58 PM No comments: