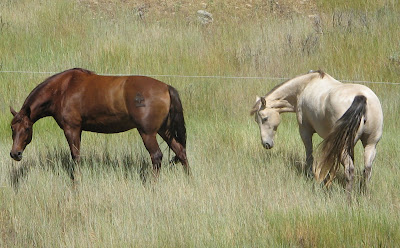 "Midnight Lady A" & "Angel Mist" (both sold) FUNNY STORY: My trainer loved one of the fillies that I sent her to be trained, so she traded me this little red mare for the filly in training. "Red" had great bloodlines, chunky build and Tamera had packed her and used her in 4-H. I ASSUMED / thought-- great!!-- she will be a great beginner horse. (Do you know the definition of Ass u me? Yep-- make an ASS of U and ME!) Anyways, I brought her home. The next morning I put a saddle on her, she was a little antsy, then not to keep Morlin waiting, I went to mount "Red" and the little bugger took off while I was 1/2 way on.. So then I had Morlin hold her while I got on, and when he let "Red" go, she took off popping! She was then dubbed "Red Rocket"! We got her headed up the hill, and she eventually settled down. That evening I called Tamera: "Tamera, when I went to mount "Red" she wouldn't stand! So then I had Morlin hold her and she took off bucking when I did get on her!" Quiet on the other end of the phone. Tamera said, "I've only ridden her a couple times!" ........... So I had put the third ride on her. Come to find out, Tamera had used her in 4-H to show HALTER!...and the reason she packed her...she wasn't broke yet. HA! But she did turn into a nice mount by the end of the summer.
Posted by MOfoxtrotters at 9:59 AM